It’s that time again. The weekend is here and the Reds face the Clarets at Anfield. That can mean just one thing – it’s time for Simon Meakin to take us through another one of his unique match previews. You won’t find anything like it anywhere else.

Why does the sun keep on shining? Why does the sea rush to shore?  Don’t they know it’s the end of the Premier League?  It ended when we won it a couple of weeks back.  Apologies for mangling the lyrics to “The End of the World”, originally a 1963 hit for one Skeeter Davis (who was a big influence on Dolly Parton according to Wikipedia, and had a propensity for appearing on American country music programmes with Dougall from the Magic Roundabout on her head according to YouTube) and covered by red-haired Scouse popstrel Sonia, but that’s how it feels at the moment.  It’s almost a surprise to find that there are still football matches going on.  OK there are some minor issues to be settled such as relegation, European places etc but it appears that we are also under some contractual obligation to still turn up, kick a ball around and walk away with three more big shiny points (unless its anywhere away from home within 50 miles of Anfield.  We don’t seem to have been all that great at that – we clearly need a longer walk to make it worth our while).

Unluckily for Burnley it turns out that Turf Moor is a grand total of 51.4 miles away from Anfield (according to the AA Route Planner anyway.  If any crows want to start arguing the toss please go ahead) Which means that we came away with a 3-0 win way back in August which included a thirty yard Trent cross cum/shot that sailed over the keeper (and unfortunately appears to have been marked down as an own goal after taking a deflection).  And also set a new club record 13th win in a row (on our way to 17 in total, which hasn’t even turned out to be our best run of the season).  And that’s what we’re going for now.  More records.  Most points, most wins, most home wins, biggest winning margin, largest parsnip, bonniest baby (I’m putting Firmino down for that one – I’m sure he had dazzling white teeth and immaculate hair when he danced right out the womb – although possibly points deducted if he was sporting his current curly, Vera Duckworth rocking Prince style pink rinse).  I want to break them all!

Hopefully Klopp can motivate them to keep going until the finishing line.  It reminds me of watching Seb Coe breaking world records as a kid.  You can find footage on YouTube of his legendary 1981 world record run in Florence.  I think I had school sports days on better quality tracks than the one he was running on (if you look closely I’m sure you can spot the PE teacher in his Adidas three stripe track suit and the kid made to run in his pants after he forgot his games kit) yet he was so far clear of the field he managed to win an 800m race by 900m (probably). Only two runners have ever beaten that time almost forty years later.  That’s want our season to be like.  The equivalent of Seb Coe in Florence.  No slacking off now boys!

And having discovered that Curtis Jones’s goal v Villa equalled another club record of 17 different league scorers in a season I now want us to go for the all-time record for that as well.  I’ve no idea what it is but I’m going to be very disappointed if Klopp doesn’t name a front three of Joe Gomez, Neco Williams and Allison for this match.  Hell he should even stick himself on the bench and bring himself on to take any last minute penalties if he can.

That would of course be taking Burnley far too lightly.  Sean Dyche (a man with a voice so gravelly he could earn a few extra quid as Lancashire’s Premier Ginger Janis Joplin Impersonator) has done a remarkable job with Burnley, still in with a shout of a spot in Europe next season.  It’s a club with a proud European heritage.  European Cup quarter finalists no less in 1961.  And this from a somewhere with a smaller population than Southport (which may have a beach bigger than Bulgaria but not exactly renowned for those big European nights against Barca under the floodlights at Haig Avenue).

Burnley are not a side I’ve seen too many times at Anfield although I was there last year to watch what was at times a surprisingly nervy 4-2 win before a last minute Mane goal settled the nerves during the run in to our ultimately doomed title challenge.  I did also once pay a visit to Turf Moor to watch them play Wolves in a second division match. Starring a Mr P “Gazza” Gascoigne, the fake breast wearing, inappropriate invisible flute playing Clown Prince of English football.  And in my opinion the greatest English player I’ve ever seen (yes I know it might be sacrilege to nominate someone who never played for us).  But not based on this match.  Hauled off at half-time with Burnley 3-0 down, to watch his teammates almost salvage a draw without him, he never started another match at that level for Burnley or anyone else ever again.  The only other sides he ever played for were the unlikely pair of Chinese titans Gansu Tianmi and Boston Utd.  It’s fair to say he’d be a shoe-in for the “They Played For Both Teams” section of the programme should Gansu Tianmi’s much anticipated pre-season tour of Lincolnshire ever come to fruition (it would be like Wham in China in reverse but much massive.  And minus Pepsi and Shirley).

Now if that hasn’t got your excitement building to fever pitch I know something that will.  Following on from the midweek win at Brighton which put us on 92 points (to put that in context that is Man United’s record points total.  Ever.  Which they achieved in a 42 game season.  We’ve done it in 34) we’ll return for our penultimate match at Anfield and win 3-0.  Two more goals for Salah as he chases the golden boot plus a last minute penalty for Joe Gomez (go on Jurgen you know you want to) for win number 31.  Sean Dyche to nip off early as he’s second on the bill at the Phoenix Club. Bolton (tonight Matthew I’ll be appearing as Ginger Janis).

We’re on that closing straight now.  The lactic acid might be burning in our muscles but the finish line and those records are in sight now.

And just as a reminder in case anyone has forgotten.  We’ve won the League!  We’re Bigger stars than Dallas!  We’ve got more silver than Buckingham Palace!  Red Machine In Full Effect! 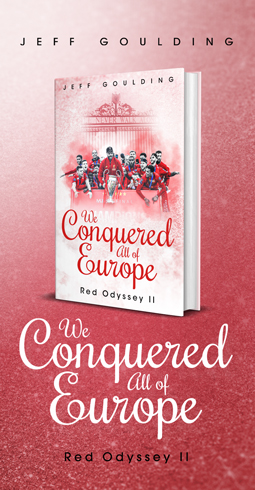 Follow Tales of Anfield Road on WordPress.com
Join 7,568 other followers