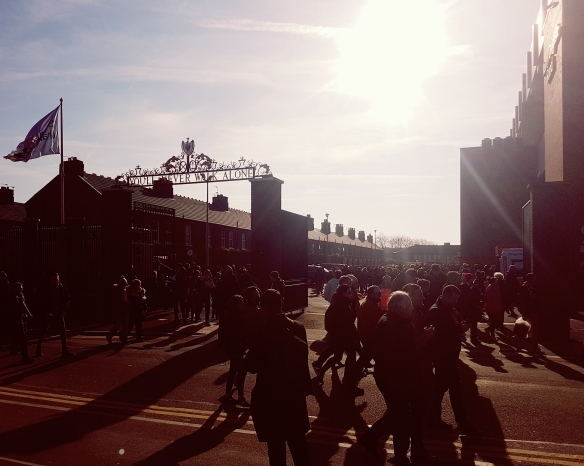 I was born in 1967, so I am kinda old now. I’ve seen the Reds win everything. Nevertheless, I missed Shankly’s first great side and that incredible first FA Cup win. By the time I became consciously aware of football, Shanks was in the process of rebuilding his second great team. The Reds were not winning things – Liverpool went six years without a trophy, between 1967 and 1973.

As a kid growing up in Liverpool in the 1970s, I faced a very simple choice; was I Red or Blue? Obviously, I chose Liverpool. My mum and dad were massive Reds, as were my grandparents, aunts and uncles, but I had lots of Blue mates. If I’m honest, I can’t really say it was parental influence, I’d have chosen Liverpool anyway. And it was because of one man.

If I was going to pick the best side on Merseyside at the time, I might have decided to support Everton. But Everton didn’t have Bill Shankly.

Shankly was like a God to my family. His influence was pervasive, like the unofficial Prime Minister of Liverpool to us. The people who mattered to me, my family and mates, just believed in him. And, I believed in him. If he said we would be winning things again soon, then that was it. Enough said.

The first big game I remember was the 74 FA Cup final against Newcastle. I watched that at home on the telly and I’ve written about this before, but the reactions of the people I loved, to that game and that win, will live with me forever. I would say my all-consuming love of the club can be traced back to that day.

Of course, they could be beaten and did lose from time to time, but in my childish mind they could do no wrong. I was so convinced of their infallibility, that a defeat would be met with bemusement more than anger.

Anfield was a magical place, where miracles happened far more regularly than in the the other two cathedrals at either end of Hope Street, Liverpool. There was nothing special about the bricks, mortar, steel and concrete of course. The Kop was austere and the atmosphere was raw, gritty and working class. The Anfield Road end was just as raucous and the people who frequented that part of the ground were as proud and loud as Kopites, who they often referred to as ‘gobshites,’ long before Evertonians did.

For all its primitive trappings. I loved the place. I still do. Especially during a night game, when the grass looks so green and the lights so bright. The feeling of being in a crowd that feels more like a community and being swept up in song and draped in banners is second to none.

Anfield has changed, of course it has. The ground has been evolving for more than a century, along with the team and the people they represent. Yet, somehow the ghosts of those heady days of my childhood and adolescence still linger, whenever I take my seat.

There are countless stories and memories burnt into the fabric of that football ground, and in the streets around it. Some are deliriously happy tales, others are sad, even tragic. Anfield Road has been trodden by countless Reds down the years. Everyone of them carried hope in their hearts and had dreams and songs to sing.

That’s why I care so much. For me, there’s no other way to explain my obsession with the fortunes of 11 men I don’t know, kicking a ball around a field, unless I accept that being a Liverpudlian is about being part of something bigger than myself. I am not religious at all, but perhaps my affinity with Liverpool, the club and the city, is as close to a religious experience as I will ever get.

It is irrational, joyous, despairing and often life affirming. But, it makes no sense when you sit down and try to analyse it. Is that religion? Maybe. All I know is it’s my life and I will be a Liverpudlian until I die.

My politics is the socialism of Shankly. I believe in collective effort and communal reward. I am unapologetically left wing. I don’t subscribe to the notion that politics and football should be kept separate. Heysel and Hillsborough, Thatcher and the doctrine of managed decline have taught me that politics is life and life is political.

So, I write about all of that. My team, my loves and my passions. I hope you stick around on these pages, read, enjoy and join in the conversation. And, if you fancy it, pick up one of my books or all of them, if you like.

4 thoughts on “Oh, I am a Liverpudlian”