On this page, you will find interviews, podcasts, news and reviews of my books in the media. Scroll down the page and click on the links to listen and read.

Me, on These Football Times.

On the 24th June 2019, I sat down with Stuart Horsfield and Steven Scragg to discuss my favourite Liverpool side of all time, on These Football Times.

It became an in-depth discussion on how reigning champions Liverpool – led by Bob Paisley and featuring a star-studded line-up – overcame defeat in the first round of the European Cup to Brian Clough’s Nottingham Forest to produce a domestic season of such quality that it remains one of the greatest in English football history. 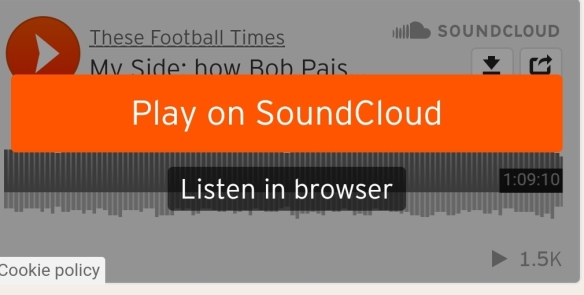 Me. talking Stanley Park Story on These Football Times

In February 2019, I sat down with Stuart Horsfield, Steven Scragg and Gary Thacker to talk about Stanley Park Story. They had this to say:

“Crossing football fact with fictional is an art form in itself, which few authors can pull off. A genre popularised by Nick Hornby’s iconic Fever Pitch and continued adeptly by Mr Shankly’s Photograph, The Damned United and Red or Dead, join our regular hosts as they talk to Jeff Goulding, writer of the brilliant Stanley Park Story, the modern benchmark and successor to the football “faction” greats.”

Me, on Across the Park Podcast

In December 2018, I spent a great hour talking to Across The Park Podcast about Merseyside Football, my life as a Red and my book, Stanley Park Story.

A rich tapestry – yes for football fans – but also for anyone interested in how decades of social, political and cultural change and upheaval shaped Merseyside.

If you think only a football fanatic could be interested in Jeff Goulding’s novel Stanley Park Story – Life Love, and the Merseyside Derby, think again.

At one level it’s an evocative and always entertaining story charting the lives of two Liverpool families against the backdrop of intense football rivalries. The city is home to two of the biggest and most successful teams in English football: Liverpool – the Reds, and Everton – the Blues. The two central characters are Jimmy, who supports the Blues, and Tommy, who favours the Reds. The derby matches between the two clubs have produced some of the most famous occasions in England’s football history. And they give the novel its narrative spine.

But Liverpool as a city is much bigger than the fate of its football teams, and the fervour generated among the supporters. As Bill Shankly, the legendary Liverpool club manager, famously said:

“Some people believe football is a matter of life and death. I am very disappointed with that attitude. I can assure you it is much, much more important than that.”

By which he meant, it’s more than a game in which 22 players kick a ball around a grass pitch. It’s a communal and collective experience, which embraces players and supporters.

This is reflected in another of Shankly’s widely quoted remarks, this time when talking about what socialism meant to him:

“The socialism I believe in isn’t really politics. It is a way of living. It is humanity. I believe the only way to live and to be truly successful is by collective effort, with everyone working for each other, everyone helping each other, and everyone having a share of the rewards at the end of the day. That might be asking a lot, but it’s the way I see football and the way I see life.”

It’s a sentiment affirmed in the words of the novel’s narrator Tommy:

“Football is about belonging; it’s about shared stories and common purposes. You keep going through the bleak times because in the end these are your people, whether they’re on the pitch or in the stands. You win together, and you lose together.”

Stanley Park Story is ostensibly about the Merseyside derby matches between Liverpool and Everton, told through the lives and loves, the emotional highs and lows, of two familes – of joys shared and tragedies suffered, a story of friendships made, broken and restored.

But entwined in that story, as reflected in its main characters, is the politcal, social and cultural history over the past half century, and how this impacted on the people of Liverpool and reverberated far beyond.

So, while Stanley Park is a hugely engaging novel, it is also a documentary of the times in which the story takes place. And so rich is the setting that on finishing the book, I almost wished it had an index. From the Ford factory strikes to rent stikes, from the 1978-79 “winter of discontent” to Margaret Thatcher’s vindictive hatred of the city, from the Militant Liverpool council to support for the 1984-85 miners strike, from the traumas of Heysel and Hillsborough to the city-wide boycott of the Sun, from the Beatles to Echo and the Bunnymen. As Tommy remarks:

“All those individual battles, going on peace marches, demonstrating and striking, they were all necessary and important. We wanted to live without fear, to be free from poverty wages and slum housing so that we could enjoy our lives. We wanted to listen to music, play and watch football and travel the world with our teams.”

Anyone who knows Jeff Goulding from his widely published writing, whether on football, politics, or the Labour party and Jeremy Corbyn, will need no persuading of his eloquence and style. Anyone else is in for a treat. In Stanley Park Story, he has created a rich tapestry – yes for football fans – but also for anyone interested in how decades of social and political change and upheaval “shaped Merseyside into a strongly working-class region, with a socialist outlook”.